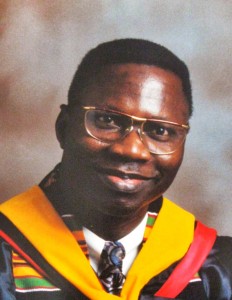 He Started his primary education at Agboro Baptist  School in 1960 and completed the same at United Primary School Ayetoro.  He joined the Jehovah Witnesses, Watchtower Bible and Tract Society in 1969.  He dropped out of Narseret High School believing the world would come to an end in October 1975 and became a Baptized Minister of Jehovah Witnesses in 1971

Twenty years later He went back to school to complete his high school education at Sussex Technical School Ijaye Ojokoro and gained  admission to study Accounting and Economics  at Essex County College in Newark, New Jersey in the United States of America. After earning an Associate Degree he proceeded to Rutgers University where he obtained a Bachelor of Science Degree in Accounting and Economics.

He unofficially left the Watchtower Bible and Tract Society in 2009, believing that the organization is preaching false doctrines and predicting false prophesies, such as the end of the world in 1914, 1925, 1975, to name but, just a few. (Deuteronomy 18: 20-22, I John 4:1,6, John 10:7-9)  He deferred going to College for 20 years because he relied on the Watchtower Society’s prediction that the end will come in 1975.

Another doctrine that convinced him that the organization is teaching falsehood is a principle that has destabilized so many families, such as, a wife become the spiritual head of the family if the husband was discipline for any organizational offenses.  The children or the parents are forced to shun their parents or children if one of them is disfellowshipped for any offense.  This doctrine violates the principle of headship and unconditional natural love.  (1 Corinthians  11:3, Ephesians 6:1-3)

Comparing the Organization’s truth with the Bible’s truth, he came to the realization that the organizational truth changes with time, and they were inspire expression of errors. This is an organization which prides itself as the ONLY truth and God’s  ONLY organization on earth.  This is a grandiosity at best.   (John 10:7-9  John 14:6 and Act 4:12. Hebrew 13:8, I John 4:1,6)

Also, his research show him that the ruler of this world (Satan) has infiltrated the majority of the world’s religion. (John 12:31)   After months of prayerful consultation with his Lord, Jesus anointed him to direct honest hearted people to Jesus, the only WAY, the TRUTH and LIFE. (John 14:6)